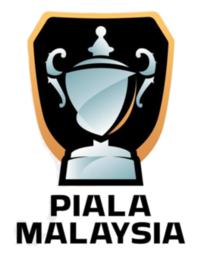 The Malaysia Cup (Malay: Piala Malaysia), formerly known as Malaya Cup, is an annual association football tournament in Malaysia, held at the end of the calendar year. The cup was first held in 1921. Despite its prestige and popularity as the nation's oldest cup tournament, it is currently a secondary cup to the Malaysia FA Cup, as Malaysia's slot for continental cup tournament (AFC Cup) is usually allocated to the winner of the Malaysia FA Cup. The competition was previously managed by the Football Association of Malaysia, before it was transferred to the Football Malaysia LLP (now known as the Malaysian Football League) in the 2016 season.

The current title holder is Kuala Lumpur City, who won the 2021 edition.

The Piala Malaysia is one of Asia's longest-running football competitions. Established in 1921, it was known as the Malaya Cup from 1921 to 1967, after the donation of a trophy from the British Royal Navy ship HMS . The tournament was renamed the Piala Malaysia in 1967. For much of its history, the Cup was contested by Malaysian state teams, military teams as well as foreign invitees Singapore and Brunei. Malaysian club teams were allowed entry into the competition from 2000.

Three months later, the Chief Secretary of the Federated Malay States government received a letter from Captain H. T. Buller of HMS Malaya, which offered two cups to be competed for in football and rugby as tokens of their gratitude for the reception they received in Malaya. The offer was accepted and various club representatives met to organise the tournament.

A Malaya Cup committee was set up and it was decided to run the football competition in northern and southern sections. The first tournament were entrusted to be run by the Selangor Club. The first ever Malaya Cup match was played on 20 August 1921, with Selangor defeating Penang 5–1 in front of an estimated crowd of 5,000 in Kuala Lumpur. The inaugural tournament were played by six teams and won by Singapore where each Singapore players received a gold badge for their victory.

The popularity of the tournament was already apparent in its early years where in 1923, a newspaper described it as “by far the greatest sporting event of the year (in Malaya)”. The final was played outside Kuala Lumpur for the first time in 1925, when Singapore defeated Selangor 2–1 at the Anson Road Stadium. Singapore also maintained a record of appearing in every Malaya Cup final from the first in 1921 to 1941, when the competition was disrupted by World War II.

In September 1926, representatives from the football associations of Selangor, Singapore, Perak, Negeri Sembilan and Malacca agreed to form a Malayan Football Association (MFA). The MFA was based in Kuala Lumpur, with John Sime of Singapore as its first president, and was represented on the Malaya Cup committee which organised the competition. The MFA saw little activity until 1932, when it was revived and reformed as the Football Association of Malaya (FAM). The FAM also took control of the organisation of the Malaya Cup from its founding committee. The same year, the British Services were allowed to enter their own teams, joining Kedah and Johor which were both in the competition by 1930.

The Malaya Cup resumed in 1948, and the post-war era saw Pahang, Kelantan, Terengganu and Perlis enter the competition. In 1957, the final was played for the first time at the newly constructed Merdeka Stadium. The majority of the finals would be held at the Merdeka Stadium until the 1990s.

In 1959, the Malaya Cup departed from the traditional one round tournament to a two-round home and away format in three zones, East, South and North.

Where previous tournaments had been segmented into geographical zones, the 1979 edition saw every team play each other in a 17-team competition. New entries were Federal Territory (later renamed Kuala Lumpur), the East Malaysian states of Sabah and Sarawak, as well as the independent sultanate of Brunei. A one-round league competition was introduced in Malaysia in 1979. The top four teams at the end of the league will face off in two semi-finals before the winners made it to the finals. In 1981, the quarter-finals stage were introduced. When the league began, it was intended primarily as a qualifying tournament for the Piala Malaysia.

In 2003, MPPJ FC became the first club and a non state team to win the cup. Prior to that year, the two teams which made the final had always been representative sides of the regional Football Associations, or military teams.

In 2015, Football Malaysia Limited Liability Partnership (FMLLP) was created in the course of privatisation of the Malaysian football league system. The partnership saw all 24 teams of Liga Super and Liga Premier including FAM as the Managing Partner and MP & Silva as a special partner (FAM's global media and commercial advisor) to become stakeholders in the company. FMLLP owns, operates and runs five entities in Malaysian football under its jurisdiction, which include Liga Super, the Liga Premier, the Piala FA, the Piala Malaysia and the Piala Sumbangsih. It aims to transform and move Malaysian football forward.