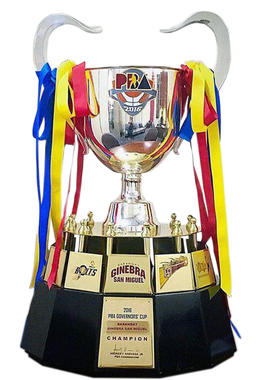 The PBA Governors' Cup is a tournament of the Philippine Basketball Association. Along with the PBA Commissioner's Cup, the tournament is one of the two conferences that allows teams to hire a single foreign player, also known as an "import". The tournament was first held in 1993 as the third conference of the PBA season.

It was discontinued in 2003 when the Reinforced Conference was revived. From 2004 to 2010, the league only held two conferences in a season; one All-Filipino tournament, named as the Philippine Cup and one with imports, named as the Fiesta Conference The tournament was re-instated in 2011 as the third conference of the PBA season after the league re-adopted the three conference format.

The Governors' Cup also refers to the trophy awarded to the champion team.

During the 1993 PBA season, the league renamed the Third Conference as the Governors' Cup, a reference to the members of the PBA Board of Governors. The singular name "Governor" refers to the board representative of each team. The conference usually was the last tournament held in a PBA season.

After San Miguel won the first Governors Cup in 1993, Alaska dominated the tournament from 1994-1997. In 1998, due to the league's commitment with the Philippine Centennial Team, they allowed each team to take two imports with a combined height of 12 feet. Shell, with no players taken for the national team, won the tournament over Mobiline.

San Miguel Beer won the tournament from 1999-2000 before Sta. Lucia upset the Beermen a year later, giving the Realtors its first PBA title. In 2002, due to the league's commitment to the national team, the Governors Cup became the first conference, while moving the All-Filipino Conference as its third and last tournament. Since most of the teams' star players were with the national squad, the PBA once again allowed teams to take two imports with a 12-foot maximum total height limit. Purefoods beat Alaska in seven games to win the title.

The tournament was retired in 2003 after the re-introduction of the Reinforced Conference as the third conference of the season but was eventually reactivated in 2011 after the league restored the three-conference season format.