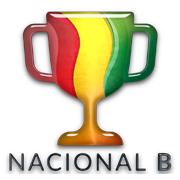 Teams had to use at least one U-19 player throughout any match; likewise, the number of non-Bolivian players was limited to a maximum of four players at any given point of a match.