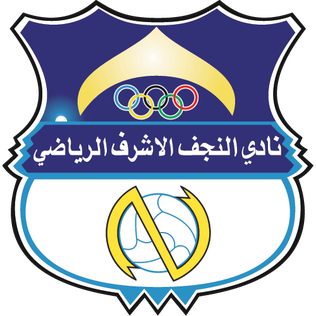 Al-Najaf Sports Club (Arabic: نادي النجف الرياضي) is an Iraqi professional football club based in Najaf. They are members of the Iraqi Premier League. Al-Najaf has competed in the 2007 AFC Champions League.

In 1960, the city of Najaf began an active movement to establish a sports club after the athletes then felt the need of the city to a sports club that absorbed the energies of young people and their creations which are almost lost in the amateur leagues. Some of the dignitaries of the city were contacted for this purpose. The request was submitted to the Ministry of the Interior, which was responsible for the authorisation of sports clubs in Iraq at that time. The name of Al Ghiri Sports Club was proposed for this institution. In 1961, the Ministry of the Interior approved their request to establish the club and thus wrote the birth certificate of the first sports club in the city of Najaf and consisted of the first administrative body of Messrs. Naji Hassan Hasswa as president and Maki Hadi Maala Vice-President and Alwan Elsafer as secretary. At the beginning of the establishment of the club, the Ministry of the Interior allocated an annual grant of 60 dinars divided into two instalments, and the club relied on this grant and monthly subscriptions from its members.