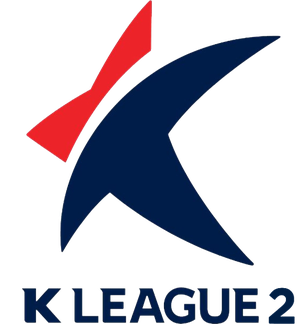 The K League 2 (Hangul: K리그2) is the men's second professional football division of the South Korean football league system. The league is contested by eleven clubs. It operates on a system of promotion and relegation with the K League 2 and K3 League starting from 2023 season.

In 2011 the original K League announced a plan to begin a promotion and relegation system between the K League and a proposed second division. The K League then took steps to create the new second division, mainly with the addition of a split-system during the 2012 K-League season in which the bottom clubs are placed in a competition for safety with the last placed club being relegated to the new second division (originally it was going to be two clubs relegated but the withdrawal of Sangju Sangmu FC meant only one would be relegated). In the 2013 season, the 13th and 14th teams in the K League Classic were automatically relegated, while the 12th team played a match against the winner of the newly-formed K League Challenge to decide promotion/relegation. From the 2014 season, only the 12th team of the top division is automatically relegated, with the 11th team playing a two-leg match against the winner of the K League 2 promotion playoffs to decide promotion/relegation. The promotion playoffs are as follows: the fourth-placed team plays against the third-placed team, then the winner of this match plays with the second-placed team. If the match is tied, the higher-placed team advances.